India's most recognized monument and is also one of the Seven Wonders of the World.
How to Get There? | When to go | Taj Mahal Inside rare footage video

Most travelers call this wonder in India the world's most beautiful building, built by the Mughal Empire, the invading muslim rulers of India on the banks of the Yamuna River. It is a mausoleum built in the memory of his beloved and favorite wife, Mumtaz Mahal, fulfilling one of the promises that he made to her as she lay on her deathbed. The Taj Mahal is located in Agra, in the state of Uttar Pradesh, approximately 200 kilometers (125 miles) from Delhi.

Shah Jahan's reign is considered the golden age of Mughal art and architecture. Among the building he erected were the unsurpassed Taj Mahal at Agra, and the new city at Delhi, which he made his capital. Taj Mahal is a hybrid of many artistic styles including Hindu, Mogul, Persian and Islamic. From afar, the Taj Mahal is as beautiful as the poets promise! glowing tribute to obsessive adoration and a symbol of India around the world. But up close the picture begins to crumble.

Taj Mahal was constructed over a period of twenty-two years, employing twenty thousand workers. It was completed in 1648 C.E. at a cost of 32 Million Rupees. The mausoleum is a part of a vast complex comprising of a main gateway, an elaborate garden, a mosque, a guest house, and several other palatial buildings. The main dome was designed by Ismail Khan from the Ottoman Empire. 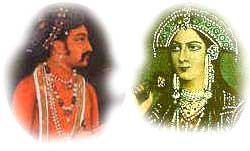 Agra, once the capital of the Mughal Empire during the 16th and early 18th centuries, is where Taj Mahal, India's most famous architectural wonder is situated. This is the land where magnificent temples and edificies abound to remind visitors about the rich civilization of India. The court chronicles of Shah Jahan's grief illustrate the love story traditionally held as an inspiration for Taj Mahal. The focal point of the monument is constructed in white marble extravagantly inlaid with semi-precious stones and with calligraphed verses from the Quran

The Mughals were historically ruthless conquerors and empire builders who, amongst many other radical activities, discriminated against the Hindus. Shah Jahan means King of the world and Mumtaz means the chosen one. The Taj Mahal incorporates and expands on design traditions of Persian architecture and earlier Mughal architecture. Specific inspiration came from successful Timurid and Mughal buildings.

An ancedot says Taj Mahal was built over a period of twenty two years, however the fact is that, Taj took only eleven years to complete (1632-1643). Probably the legend of 22 years originated from a statement to the same effect. Twenty thousand people were deployed to work on it. The architect of the Taj Mahal was Ustad Ahmad, a native of Lahore who was awarded the title of "Nadir-ul Asr" (Wonder of the Age) by Shah Jahan.

Shah Jahan came to power in 1622 when he seized the throne from his father, while murdering his brothers to ensure his claim to rule. Different people have different views of the Taj but it would be enough to say that the Taj has a life of its own that leaps out of marble, provided you understand that it is a monument of love in whatever form....its an architectural masterpiece.

There are many tours available for the visitors to visit Agra and Taj Mahal which represents symbol of love.

Tours to Agra and Taj Mahal are very popular among foreign travellers. Similarly, anyone can rent a car in Agra to take him or her to Taj-Mahal as well as nearby places such as Itmad-ud-Daulah Tomb, Akbar's Tomb, Ram Bagh, Dayal Bagh, Jahangir Mahal, Panch Mahal, Jama Masjid and many more. So, anyone visiting Agra can explore the magnificent Moghul architecture and its commitment to attention to detail.

There are many tour operators available in Agra who can take visitors to Taj-Mahal and nearby other tourist hot spots. After visiting Taj-Mahal, any discerning tourist can visit Agra Red Fort which is only 2.5 Km from Taj-Mahal.

Taj Mahal was built by a Muslim Ruler Shah Jahan in the memory of his beloved and favorite wife Mumtaz Mahal at Agra, India. It is an "elegy in marble" or some say an expression of a "dream." Taj Mahal (meaning Crown Palace) is a Mausoleum that houses the grave of queen Mumtaz Mahal at the lower chamber. The grave of Shah Jahan was added to it later. The queen’s real name was Arjumand Banu. In the tradition of the Mughals, important ladies of the royal family were given another name at their marriage or at some other significant event in their lives, and that new name was commonly used by the public. Shah Jahan's real name was Shahab-ud-din, and he was known as Prince Khurram before ascending to the throne in 1628.

Taj Mahal stands on the bank of River Yamuna, which otherwise serves as a wide moat defending the Great Red Fort of Agra, the center of the Mughal emperors until they moved their capital to Delhi in 1637. It was built by the fifth Mughal emperor, Shah Jahan in 1631 in memory of his second wife, Mumtaz Mahal, a Muslim Persian princess. She died while accompanying her husband in Burhanpur in a campaign to crush a rebellion after giving birth to their 14th child. The death so crushed the emperor that all his hair and beard were said to have grown snow white in a few months.

Shah Jahan had three wives. His second wife, Mumtaz Mahal, whom he had married in 1612, died in 1631. She had been the mother of 14 of his 16 children. It was to her memory that the Taj Mahal was built. In this most beautiful of the world's tombs, the minutest detail has been carefully thought out and executed with tireless precision. In inscribing texts from the Koran round the tall doorways, the artists have shown themselves such masters of perspective that the letters 30 feet or more above the line of the eye appear to be exactly of the same size as those a foot above the floor level. Onyx, jasper, cornelian, carbuncle, malachite, lapis lazuli, and other precious stones are studded in the mosaic. It has been described as "A Dream in Marble."

The unique mughal style combines elements of Persian, Central Asian, and Islamic architecture. Most impressive are the black and white chessboard marble floor, the four tall minarets at the corners of the structure, and the majestic dome in the middle. The impressive pietra dura artwork includes geometric elements, plants and flowers, mostly common in Islamic architecture. The level of sophistication in artwork becomes obvious when one realizes that a 3 cm decorative element contains more than 50 inlaid gemstones.

This wonder is truly priceless. No one could today assemble craftsmen in or outside of India with the same skills and talent levels of those who toiled on the monument.

Soon after the Taj Mahal's completion, Shah Jahan was imprisoned by his son, Aurangzeb. It is rumored that Shah Jahan died in Muasamman Burj, a tower with a marble balcony with an excellent view of the Taj Mahal.

Agra can be visited by air, railways and road from all major cities of India. Also, without any restrictions, Agra or Taj Mahal can be visited in all seasons of the year. However, one should note that Agra has hot weather during summer and very cold weather during the winter. If anyone is equipped properly with appropriate clothing or attire, his or her visit to Agra or Taj Mahal will be certainly a pleasant one. Hence, a trip to Taj Mahal in Agra is a must for any traveller visiting India. It will be a worthwhile tourist expedition that will expose the discerning traveller to unsurpassed natural beauty, ancient architecture and unique culture in Agra.

How to Get There?

The Taj is in Agra, about 200 kilometers (125 miles) south of New Delhi, the capital of India. You can easily travel to Agra from this city by air (as well as by road and rail).

Agra by Air
Agra airport is 7 km from the city center and 3 km from Idgah bus stand. Major Indian airlines operate daily tourist shuttle flights to Agra, Khajuraho, Varanasi and back. It only takes 40 minutes from Delhi to Agra.

Idgah bus stand is the main bus stand of Agra, from where one can catch buses for Delhi, Jaipur, Mathura, Fatehpur-Sikri, etc. Buses for Mathura also leave from Agra Fort bus stand.

You can travel to different parts of Agra using different modes of transport like taxi, tempo, auto-rickshaw and cycle rickshaw from the Taj Mahal area. Prepaid taxis and autos from the railway station are available. Prepaid transport is also available for excursions in and around the city limits.

All in all, one should never exclude a visit to Agra or Taj Mahal in his or her travel itinerary in India. The experience and excitement that awaits in Agra or Taj Mahal will be a unique and a memorable one. It's no surprise to see so many visitors coming back to see Taj Mahal many times. In essence, the Taj Mahal's wonderful charming and beauty certainly have a captivating effect on many visitors.

March to April and October to mid December are the ideal times.

Heavy monsoon rains fall in July to mid September - and temperatures can be scorching from April to June. 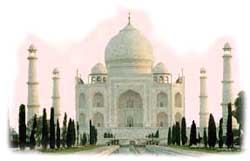