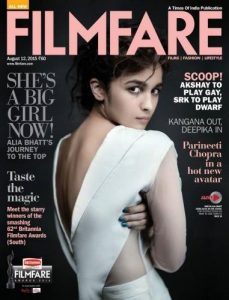 Film mags get you the inside story to every popular celebrity gossip. Everything, from their favourite food joints to their fancied accessories, From the top places on their bucket list to the clothes in their bucket.

This list features some of the best bollywood magazines covering lifestyle and careers of Indian film celebrities.

Filmfare awards are one of the highly anticipated award events in the bollywood, india film industry. The glamorous awards were instituted by the filmfare magazine in the year 1958. They were first referred to as ‘The Clare Awards’ after the Filmfare critic, Clare Mendonca. The winners are chosen by popular votes cast by the readers of the Filmfare Magazine. The award events are generally held in Mumbai which is the centre of the Hindi movie industry.