India, known as the home of spices.

The secret of the masterly art of Indian cooking requires a thorough knowledge of the properties of each spice and its blend with other spices.

Masala is a word that is often used in an Indian kitchen. It literally means a blend of several spices. Garam (hot) masala is the most important blend masala and an absolute essential to north Indian preparations, added just before serving the dish to enhance its flavor.

The rational garam masala is a blend of cardamom, cinnamon, cloves and black pepper. Masala may be in dry, roasted ground or paste form.

So one can say that the characteristic of each curry relies entirely on the balance of herbs and spices that go into its creations. Local influence distinguishes curries from one region to another.

Asafoetida
Used as a digestive aid in Indian cooking.

Bay Leaf
A bay leaf is a fragrant leaf added to to rice, biriyani, soups and sauces.

Mace
Mace is the dried net-like covering of the shell of the nutmeg seed.

Food is tasteless without spices, and every region has its own preferred ones. It’s these unique combinations that give different cuisines their uniqueness. Spices contribute rich flavor to food without adding any calories or fat.

Spices are defined as “a strongly flavored or aromatic substance of vegetable origin, obtained from tropical plants, commonly used as a condiment”. A spice is a dried seed, fruit, root, bark or vegetative substance used in nutritionally insignificant quantities as a food additive for the purpose of flavoring.

What are the most important Indian spices?

The Essential Indian Spices are:

What spices are in an Indian spice box?

The secret to mastering home style Indian cooking lies in the spice box.

In an Indian kitchen, the spice box is the most prized item.

The idea is that you set the box beside your stove, so you’re not scrambling and looking for different spice containers while the oil is at its perfect temperature.

Timing is key in Indian cooking. 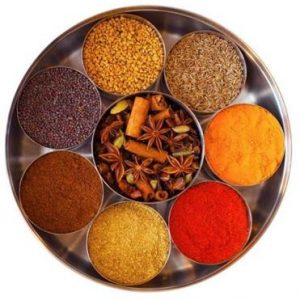 Where do most spices come from?

Most spices are grown in the tropical regions of the world.